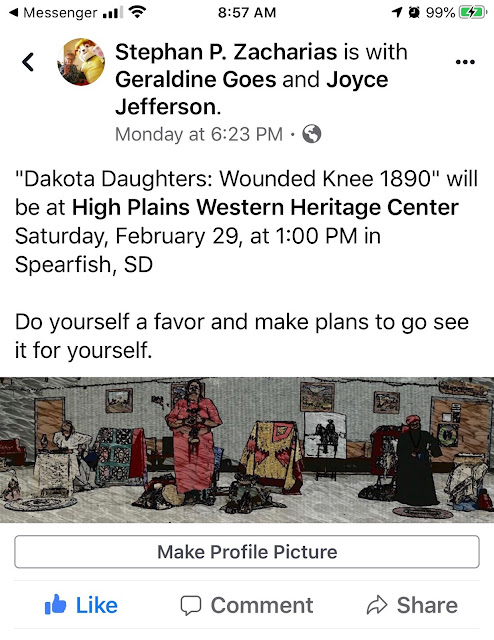 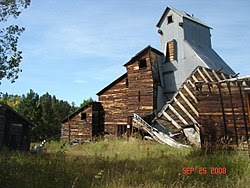 Chris Hills will present
the "Forgotten Prospectors of Tinton" on Sept 3 at 7:30 for the first presentation of the season for the Spearfish Area Historical Society at the Spearfish Senior Citizens Center.

The Tuesday March 5 presentation will be on "A Visual History of Spearfish/Dakota Territory - 1875 to 1910 Postcards and Stereo Views" by Tom Louks. 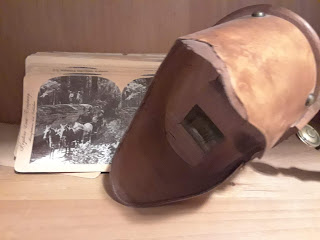 This program of the Spearfish Area Historical Society was originally scheduled for Oct 2018 but is now being presented on March 5, 2019 at 7:30pm at the Spearfish Senior Citizens Center.

"An Evening with a Wyoming Cowboy" -- Wilbur Newland

Wilbur Newland presented "An Evening with a Wyoming Cowboy" on Jan 8, 2019 for the Spearfish Area Historical Society at the Spearfish Senior Citizens Center.

Wilbur Newland shared cowboy stories (such as cowboy bedroll etiquette), and recited cowboy poetry and Shakespeare for 72 people at the event. 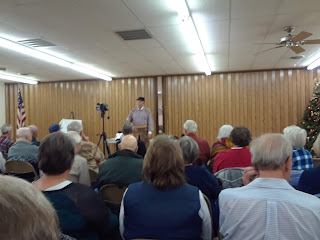 Randy's characters were real people who were buried at the Ft. Meade Cemetery (located at the top of the hill south-west of Ft Meade with a great view of Bear Butte).

Besides the great characters portrayed, there were tidbits of information about Ft. Meade soldiers who were also tasked to do carpentry work, care and shoe-ing for horses (a farrier), and just about anything.  Pay was $13.00 a month.  Sturgis was know as "Scoop Town" because it scooped up a soldier's pay.

In 1901, Ft Meade forbid wine and beer sales at the Fort, so the sales soared in Sturgis. 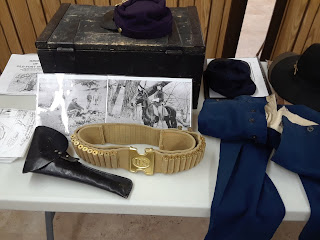 Ft. Meade was known as the "Peace-keeper Post", making strides at keeping the peace in difficult times. 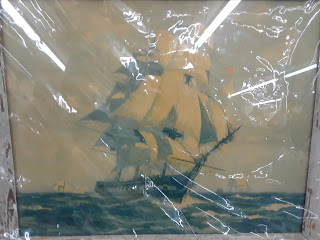 Randy brought in antiques from the Fort and also a recent find to be placed at the Ft. Meade Museum.  It is a remnant of the U.S. Prigate Constitution ship keel made into a picture frame with a print picture of the ship. 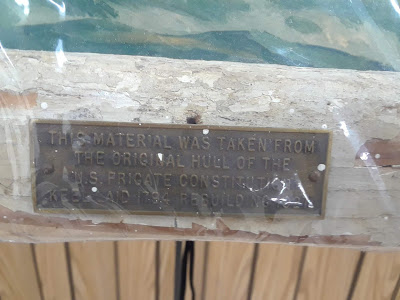 In 1801, Thomas Jefferson became the third President of the United States.   Spain owned the western land mass in North America and in 1801 signed a secret treaty to transfer it to France.  The United States had no port south in the gulf and was eager to gain a port in New Orleans.  Instead of just the gulf area, France offered the entire land mass of 828,000 sq miles for $15 million.  And so in Dec 1803 America bought the Louisiana Purchase for just 3 cents per acre.

Jefferson commissioned Merriweather Lewis to explore the new territory.  Lewis offered William Clark the chance to team up with him.  The mail was so slow that Clark was within 24 hours of missing out on the job.  Lewis & Clark   They obtained a 55' x 8' keelboat that could be sailed, rowed, and pulled to venture west, starting from Pittsburg down the Ohio River to camp north of St Louis in the winter of 1803-'04.  From there, they hired 44 men to join their "Corps of Discovery".

On May 14, 1804, Clark and the Corps joined Lewis in St. Charles, Missouri and headed upstream on the Missouri River in the keelboat and two smaller boats at a rate of about 15 miles per day. Heat, swarms of insects and strong river currents made the trip arduous at best.

The day before they made it to Dakota Territory, On August 20, 22-year-old Corps member Sergeant Charles Floyd died of an abdominal infection, possibly from appendicitis. He was the only member of the Corps to die on their journey.

Their journey into Dakota Territory started on August 21, 1804 with a buffalo hunt and Lewis becoming ill of arsenic poisoning.  They ventured to Spirit Mound north of Vermillion and the James River where they met three Yankton Sioux Indian boys.  They Yankton Sioux were peaceful and accepted the Jefferson Peace Medals - a coin stamped with the image of a handshake.  They were warned of the Teton Sioux further north on the Missouri River.

Lewis & Clark logged new animals into their journals in South Dakota such as a "barking squirrel" (prairie dog) and a "prairie wolf" (coyote).

Near the middle (south to north) of South Dakota, they encountered the Teton Sioux, who were not friendly but a large group agreed to met with the Corps.  There were four chiefs and Lewis thought one was the head chief so offered a coat and hat to him.  This very much angered the other chiefs and the Corp barely made it out on the river, with the Teton Sioux yelling and taunting them along the banks for a long while.

In early October, the first reference to the Black Hills was made in Lewis & Clark journals as the "Black Mountain".   By late October, they met a friendly Indian tribe the Arikara.  And on Oct 24, they made it to what is now the  North Dakota border. 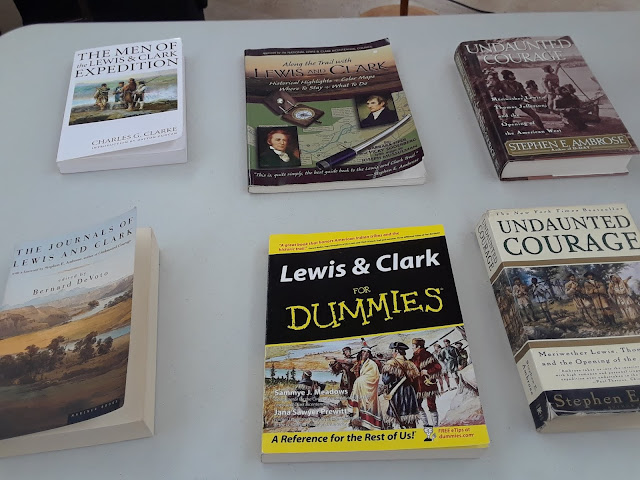 Did you know that the SD state seal/logo was design in 1885 and approved in 1889?  It features a smokestack of a smelter, but there was no smelter industry in the state at the time.

Where was the payout gold found in the Black Hills?  Along Deadwood Creek and Whitewood Creek.

Was there any violence in the early years of the Black Hills Gold Rush?   Sadly, yes.  There were instances of claim jumping and stage hold-ups.

Who got the winning stake? The Homestake deposit was discovered by Fred and Moses Manuel, Alex Engh and Hank Harney in April 1876, during the Black Hills gold rush.  A trio of mining entrepreneurs, George Hearst, Lloyd Tevis, and James Ben Ali Haggin, bought the claim from them for $70,000 on October 18, 1877.  The Homestake deposit was a 600' x 1500'  claim. An 80-stamp mill began crushing Homestake ore in July 1878.  The partners sold shares in the Homestake Mining Company and listed it on the New York Stock Exchange in 1879.

What happened to the Homestake Mine?  George Hearst died in 1891, 14 years after stepping onto the Homestake depost.  Thomas Grier took over as manager and, together with Charles W Merrill, set up cyanide processing plants to retrieve the gold at 90% recovery -- the slime plants.  Many more claims were added, for a total of 300 claims by 1900.  The mining company grew from a handful of employees to 2,000, employing mostly immigrants hailing from all over Europe, although over half were Cornish or English.  From 1890 to 1910, the Lead area had the most diverse population in South Dakota.

The Homestake Mine was in production for 124 years until the end of 2001.   In 2002, the Homestake Mining Company was merged into the Canadian-based Barrick Gold Corporation.  Local offices and employees continue to control and monitor land management and environmental aspects from the massive mine. 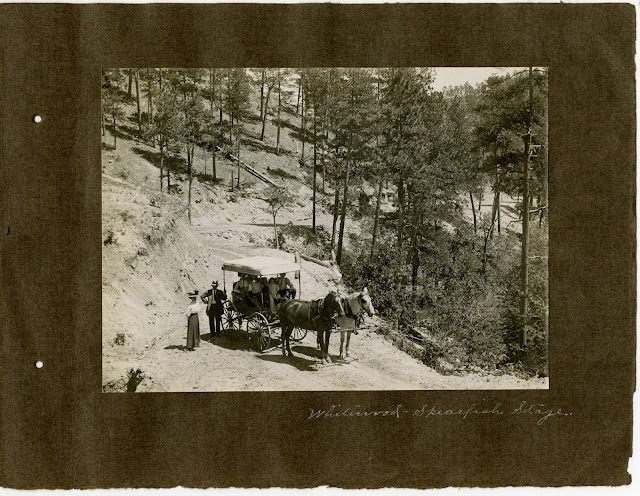 Note:  This program was cancelled due to Tom Louks' car accident, from which he is recovering.

Older Posts Home
Subscribe to: Posts (Atom)
Send us an e-Mail
WELCOME!
The Spearfish Area Historical Society normally meets on the first Tuesday of every month September through May; all meetings begin at 7:30 p.m.
The PROGRAMS tab at the top of the page lists our 2019-2020 programs. Programs are held at the Spearfish Senior Citizen's Center at 1305 Tenth Street. Please check out the Programs Tab for details.
We invite you to browse through our web site and photo galleries to learn more about our organization. And we hope to see you at our next meeting!