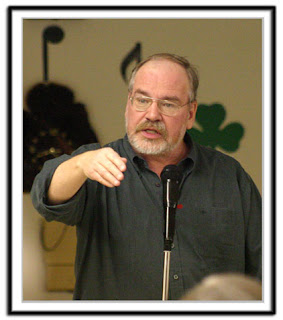 The late pioneer lawman Seth Bullock came alive for an hour or so the other night (3/4/08) – resuscitated in the graphic narratives of historian David Wolff. It was the latest in an outstanding series of speakers lined up by the Spearfish Area Historical Society.

Wolff, an Associate Professor of History at Black Hills State University, spoke to a full house of society members gathered at the Spearfish Senior Citizen’s Center.
Using a wide range of little-known facts about Bullock, Wolff focused on just the first year or two after Seth arrived in Deadwood from Montana in 1876. Bullock had a diversified and colorful career as a miner, politician, merchant, rancher, lawman, and forest supervisor. He was an interesting character, but his story has often been needlessly embellished and exaggerated over the years. Wolff debunked several myths, including Bullock’s role as a lawman (he never killed anyone) and his role in creating Belle Fourche (he never lived there). Read more about Seth Bullock as assembled by the Adams Museum and House in Deadwood, a marvelous resource for old west history.
Wolff was asked about the Seth Bullock ghost that supposedly haunts the Bullock Hotel in Deadwood.
“The real story of the hotel,” said Wolff, “is that Bullock had very little to do with it…he started building a hotel and got his name on the building, and he was done. So if there’s a ghost in there, he’s haunting from his hardware days or his sheriff days. Bullock never ran a hotel.”
Wolff is writing a book about Bullock, whom he described as “a man nobody really liked.” He pointed out that Bullock was appointed to his 9 ½ months as Sheriff and was never elected to anything. In fact, he was defeated twice in back-to-back elections for Sheriff of Deadwood.
After his talk, Wolff visited with many of the folks who had attended the meeting and discussed other aspects of Bullock’s life. We have a few photographs. He expressed a willingness to return next year to talk about other facets of the legendary lawman's life.
Next month, writer Paul Higbee will share some of his research into the creation of Black Hills State University and one of its early presidents, Lafayette Cook. That presentation will be in the Senior Citizen’s Center at 7:30 p.m., Monday, April 1st – no fooling!

Newer Post Home
Send us an e-Mail
WELCOME!
The Spearfish Area Historical Society normally meets on the first Tuesday of every month September through May; all meetings begin at 7:30 p.m.
The PROGRAMS tab at the top of the page lists our 2019-2020 programs. Programs are held at the Spearfish Senior Citizen's Center at 1305 Tenth Street. Please check out the Programs Tab for details.
We invite you to browse through our web site and photo galleries to learn more about our organization. And we hope to see you at our next meeting!