Historian David Wolff says he originally wasn’t much interested in famed Dakota lawman Seth Bullock. But the more he learned about Bullock and his many political and business pursuits, the more enthusiastic he became about finding out more. At different stages of his life, Bullock was a sheriff, a banker, a rancher and a miner. 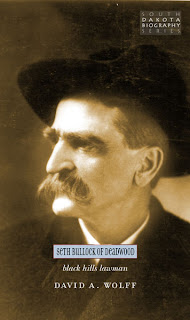 Wolff, an Associate Professor of History at Black Hills State University, has just completed Seth Bullock: Black Hills Lawman, a book that chronicles the life of the legendary Bullock It was published by the South Dakota State Historical Society Press and should soon be available at most bookstores across the region.

On Tuesday evening (4/7/09) at the Spearfish Area Historical Society meeting, Wolff focused on Bullock’s many business pursuits – almost all of them busts. This was something of an encore presentation for Wolff, since he had already spoken to the group about Seth Bullock in a 2008 program -- but that program concentrated on Bullock’s role as a lawman.

A considerable portion of Wolff’s talk this month further revealed Bullock’s close relationship with his partner Sol Star. They had befriended each other in 1871 while living in Virginia City, Montana, which was the territorial capital. Star was working for the Governor and Bullock served in the legislature.

“They bumped into each other while looking for a room – as were two other guys,” says Wolff, and they all ended up sharing an unfurnished room in Virginia City, where lodging was at a premium.

A few years later, Bullock married his childhood sweetheart from Michigan, Martha Eccles. In 1875, their daughter Madge was born.

“When Bullock decides it’s time to go to Deadwood in 1876, he doesn’t want to take his wife and new daughter…it was too rough of a place. So he sends them back to Michigan.” By 1878, his wife and second daughter, Flo, join him. Ten years later, they would add a son, Stanley, to the family.

In pursuing new opportunities in Deadwood, Bullock teamed up with his old friend Sol Star, who had also come to Dakota Territory. They would collaborate in a number of business ventures for the next couple of decades, despite the fact, says Wolff, that Bullock really didn’t want to be a businessman. He wanted to be in politics – to be a sheriff. Indeed, in 1877 with the creation of Lawrence County, Governor Pennington appointed Bullock sheriff. Most locals weren’t thrilled by the appointment of outsiders by a Governor who was far away in Yankton himself. Eventually, local citizens forced an election, which resulted in the ousting of Bullock and 10 others who were running the county. In a subsequent election, Bullock again ran for sheriff – and again he lost.

“He was aloof. He was an elitist. Even his 1919 obituary said he had no friends,” says Wolff. Out of office and with few resources, Bullock apparently decided to try earning some money.

Among his many ventures: Star and Bullock Hardware on Main Street. Since Star had been appointed Postmaster, that was incorporated into the enterprise. After being implicated in postal corruption in 1881, Star lost his job as postmaster and focused on selling tin and metal “fireproof” materials at their hardware store.

During the 1880s, Bullock and Star expanded their hardware business to Billings, Miles City, Sundance, Sturgis, and Carbonate – as many as eight stores. But by 1890, Bullock was tiring of the business, and Star – who had money and was the majority partner – dissolved the partnership. Wolff speculated that it was probably because Bullock spend too much money without any significant returns.

Then Bullock turned to ranching and banking -- even mining. Read more about those endeavors and more from David Wolff’s presentation on Seth Bullock by visiting the History Photo Gallery section of Black Hills Journal.

The next meeting of the Spearfish Area Historical Society will be at 7:30 p.m., Tuesday, May 5, 2009 at the Senior Citizen’s Center in Spearfish. Linfred Schuttler returns with a program entitled Prohibition in South Dakota.
~
Once again, we express our appreciation to Ray and Darlene Telkamp of Spearfish for audio recording this program so that we might share highlights with you. Thanks, Ray and Darlene!