In case you missed his "Letter to the Editor" in the Black Hills Pioneer last Saturday (10/30/10), this piece penned by long-time Spearfish resident and historian Linfred Schuttler is well worth a read. 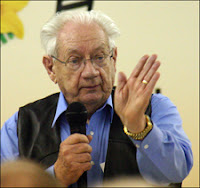 The City Council and interested citizens are planning a historical video of Spearfish to be ready for the “125th anniversary in 2013.”
The idea is great, but good heavens, let’s get the dates right.
Spearfish was established in 1876 by a town site declaration and survey made May 29, 1876, with occupancy effective May 30, 1876.   The legality of town site organization was effected under provisions of a law of the which authorized the location of town sites on government un-surveyed lands, which also set aside portions of such lands for school purposes.   The Spearfish town site document was signed by 32 founding stockholders, with at least three having descendants still living here.
Subsequent surveys confirmed the location and the town site plats which still exist as part of the present city records and maps.
On Feb. 28, 1877, President Grant signed the order abrogating the Sioux Treaty, which put all lands under territorial and county control and jurisdiction.
The town site came under county control, but few services were offered by the county.
On March 12, 1885, a charter of incorporation, under a board of trustees, was granted to the “city of .”  Three years later, under a new territorial law permitting the adoption of a mayoral and aldermanic organization of local government, Spearfish voted, in a somewhat tainted election process, to adopt a new charter which still exists today.
If the last charter date of 1888 is accepted as the establishment of a city, then , Sturgis and would be less than 60 years old.
If the last charter date is accepted, then what happened to history in the years previous?
Judge W. W. Bradley proclaimed Spearfish as the “” on July 4, 1877, because it was to be the best and leader of the rest.
Linfred L. Schuttler
Spearfish


By the way, Linfred Schuttler will present his program "Old Newspapers -- The Rest of the Story" at the SAHS meeting on Tuesday, November 9, 2010 at 7:30 p.m.  The session will take place at the Spearfish Senior Citizen's Center and is open to the public.