Wolff tells story of gold and railroads in the Black Hills

The life and death of Wild Bill Hickok added a bit of flair to the history of Deadwood and the .
Facts and embellishments regarding Wild Bill, Calamity Jane, and other 19th century characters helped give rise to a burgeoning tourism industry that continues into the 21st century. 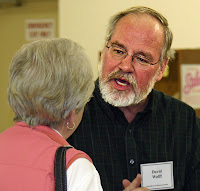 But the growth and durability of old Deadwood links back directly to two things:  gold and railroads.
In his latest presentation to the Spearfish Area Historical Society (12/7/10), professor David Wolff recounted the discovery of gold and the development of railroads in the .  A pharmacist-turned-historian, Dr. Wolff is a Past President of the Lawrence County Historical Society and continues to serve on that board.  He is also a Vice-President of the South Dakota State Historical Society and is Chairman of the Adams Museum and House Board of Directors in Deadwood.
There were rumors of gold in the hills in the early 1800’s, Wolff told the audience.
“But who knows?” he asked somewhat rhetorically.
“If the Thoen Stone is to be believed, the Ezra Kind party was here in 1833 and 1834.  If Ezra and his buddies really got all the gold they could carry,  why wasn’t there a gold rush afterwards?  Well, nobody knew about it until Louis Thoen dug the stone up.  Of course, Thoen may have made the stone, but then that’s another story.”
Wolff proffered that both discovery and a rush are required, if such an event is to be considered a true gold rush.  While there were numerous reported “discoveries” earlier in the 1800’s, there certainly was no “rush” of prospectors to the region until 1874.  That’s when the Custer expedition – replete with 110 wagons and a thousand men – entered the western near Buckhorn.  It was near present day Custer that year that Horatio Ross and William McKay reportedly found gold in July of that year.
Word spread rapidly, and the rush to the hills was on.  Wolff noted that early prospectors found some gold at Spring Creek, more near , and along Rapid Creek.  But it wasn’t much, and for most it wasn’t enough to even pay a day’s wages.
“If that’s all the gold that would’ve been found in the , the gold rush would’ve died.  The men would have lost interest, packed up and left.  It would’ve been like the Big Horns in , where there were repeated gold rushes, but they never found any real gold.
But that didn’t happen in the , where several “paying locations” blossomed in Deadwood Gulch, along Deadwood Creek and Whitewood Creek. 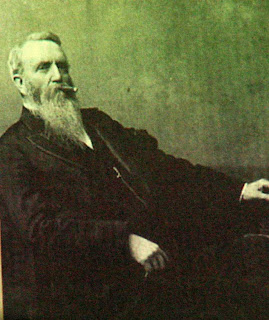 By the spring of 1876, Fred and Moses Manuel found a large outcropping of ore that became the “Homestead Claim,” measuring 600 by about 1,500 feet.  It became a focal point for hardrock mining.  In the coming months, entrepreneur George Hearst (at left) arrived on the scene and offered the Manuels and their partners $70,000 for their claims.
It was the beginning of the industrial mining that gave wealth to the region for more than a century.  Hearst and his partners developed the infrastructure necessary to process the ore, and many former prospectors went to work for the Homestake.  With the growth of the Homestake Mine, Lead became a true “company town,” while nearby Deadwood became a service center.
Even in those early days, railroads were an essential part of gold mining.  At first, it was mules and horses pulling ore out of the mines in wagons on rails.  By 1879, Homestake ordered a five-ton locomotive that had to be pulled by oxen from , to the .  That engine – dubbed the J. B. Haggin – was a workhorse for the mine, which used rail to haul timbers needed for the mining operation.  Some 130 years later, the J. B. Haggin remains on display at the in Deadwood.
Wolff traced the expansion of rail service by the from along the eastern edge of the hills, basically following the old to Deadwood stage route.  First to Buffalo Gap in 1885, on to Fairburn, Hermosa, and eventually .   In 1887, the railroad started building again, creating excitement in places like Deadwood, Sturgis, and .  Instead, FE&MV built north 10 miles and created the town of .  From 1887 to 1890, all rail business in the area came out of Whitewood. 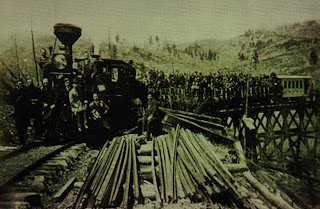 Then came news that the line was building north out of toward the coal field of .  After creating their own company town in Edgemont, announced plans to build track to Deadwood, which was eager to see the local Black Hills & Fort Pierre line connect with main lines outside the hills.  Despite its name, said Wolff, the Black Hills and Fort Pierre Railroad ran from Lead to Sugar Loaf, , then Nemo, and just to the edge of the .  There was no service to .
“1890 was an exciting time in the Black Hills as the began building from Whitewood to Deadwood, and the started building up through the center of the in a classic railroad race.”
The railroad, a subsidiary of the Chicago and North Western Railway, arrived first in Deadwood -- December of 1890.  But the   Both companies established depots in close proximity.  C&NW signage for the old FE&MV depot is still displayed on the side of the old depot building in Deadwood.  It is now a tourist information center.
Wolff quoted Sol Star, then Mayor of Deadwood, as saying that with the arrival of outside railroads, “Deadwood is finally a city of permanence.”
Wolff briefly recounted the role of Seth Bullock in helping the railroad develop , much to the chagrin of nearby Minnesela residents, who had enlisted Bullock’s help to ensure that the line would pass through their community – which is no more.  More details about this event can be found in Wolff’s book Seth Bullock – Black Hills Lawman.