Perhaps one of most overlooked historic sites in the beautiful is nestled in a small canyon on the south side of Spearfish.
The D.C. Booth Historic National Fish Hatchery has been a city landmark for more than 110 years.  Created in 1896, the facility was a very successful fish production sites – one of the earliest in the west.
It started hatching fish in 1899 and remained true to its mission “to propagate, stock, and establish trout populations in the Black Hills of South Dakota and ." For many years, the old Spearfish National Fish Hatchery was headquarters for federal hatchery operations across much of the western United States. 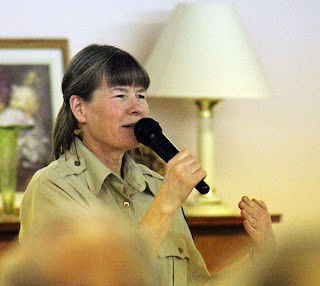 Members of the Spearfish Area Historical Society learned all about the historic hatchery last night (2/1/11) at the March meeting of the society at the Spearfish Senior Citizen’s Center.
Despite bitter cold temperatures, a good crowd was on hand to hear hatchery curator  Randi Smith (at left) talk about the early days of the hatchery, as well as a few tips about preserving documents and photogrphs.
Smith, who has been at the fish facility since 1992, nearly missed her career with the U.S. Fish and Wildlife Service.  She was a math major at the when she became involved with the Antique Mechanics Club.  She ended up with a degree in history and a job as an interpretive historian in California State Parks.  That was followed by a 15-year-stint as curator at the Grant-Kohrs Ranch National Historic Site in , which she says is “one of the most intact historic sites around.”  At D.C. Booth, she takes care of the museum, house, exhibits, research, and the museum collection and archives.
Smith traced the origin of U.S.Fish and Wildlife Service (USF&WS) back to 1871, when it was known as the U.S. Commission of Fish and Fisheries – or simply the “Fish Commission.”  Its first leader was Spencer Fullerton Baird, who also served simultaneously as Assistant Secretary of the Smithsonian Institution.
The first superintendent of the Spearfish hatchery was DeWitt Clinton (D.C.) Booth.  A large, two-story house was built for the Booth family in 1905, and it remains an inviting landmark on the hatchery grounds.
“By the late 1970’s, the Fish and Wildlife Service started putting the first museum collections at Spearfish,” said Smith.  “They recognized that they were accumulating historical items across the country – books, equipment, pictures, including a time capsule and other artifacts from the Hotchkiss National Fish Hatchery at .”
In 1982, the Museum and opened, and the historical collections “really took off,” according to Smith.  The following year, the McNenny National Fish Hatchery just northwest of Spearfish was turned over to the South Dakota Department of Game, Fish and Parks.  While D.C. Booth Historic National Fish hatchery continued to rear fish that were hatched at McNenny, the Booth facility began to focus more on history.  It became a center for the collection of historic fisheries material from across the country, as well as the history of the U.S. Fish and Wildlife Service.
In addition to the many exhibits and historical items open to the public, Smith estimated that there are “about 175,000” items in storage that have come from across the region and the country. 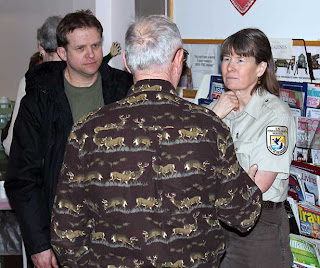 “In the 1990’s, funding was received to construct an archive building, formally named the Collection Management Facility,” says Smith.   The collection includes materials from both public and private entities, including items from tribal governments.  While the original collection focused on hatchery items, it has been expanded to include anything related to fisheries.  Hatchery offices are also in the building.
Smith expressed the desire that many of the records and photographs at D.C. Booth be scanned and be made available to the public via the internet.
Touching a bit upon archival methods, Smith shared a number of hints that people can use to avoid damaging old photographs and documents.  Using acid-free paper and folders is important, as is shying away from products that contain adhesives – including rubber bands.
Pointing out that volunteers play a critical role in the operation of the historic hatchery, Smith took a moment to recognize several hatchery volunteers who were in the audience. You can learn more about the D. C. Booth Historic National Fish Hatchery by visiting this link at the U.S. Fish and Wildlife Service.