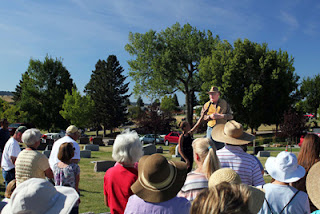 Kudos to the folks who organized and produced the Rose Hill Cemetery Historical Walk last week (9/24/11) in Spearfish.

It was a blending of drama and history that provided lots of enjoyment for nearly a hundred people who showed up for the event.  And there's no more beautiful setting than Rose Hill Cemetery, perched atop a hill overlooking Spearfish and with terrific views of the Black Hills and nearby plains.  Lookout Mountain is just to the northeast, while the Black Hills rise to the south and west.

Mother Nature did her part, too, giving us yet another beautiful day in what's turning out to be a gorgeous Indian Summer.  A few neighborhood folks enjoyed a short walk to the cemetery, and there were several of us who made the trip by bicycle.

The stars for this gathering were the historical characters depicted during an afternoon stroll around the finely manicured cemetery.

Many of those names, of course, are legendary in the community and across the regions.  Others were a bit more elusive.  All of them, however, were a hit with the crowd, which strolled from place to place across the cemetery, hearing each of these historical figures come back to life -- if only for a few minutes -- to share a bit about themselves and the times in which they lived.

This was an excellent example of how history can truly "come alive" when it's well done.  Not only was the gathering educational -- it was great fun!

Paul Higbee and Jon Steven Wiley were two key people behind the scenes in planning this event.  Higbee wrote most of the material for the actors, and Wiley was the director.  Wardrobe was handled by Joe Saracco, and Linda Wiley was involved in coordinated much of the production.

The actors, did a great job of "getting in character," and we're already looking forward to another performance next year!