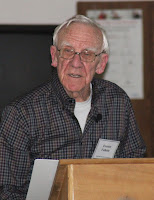 Geology may seem complicated and irrelevant to many folks, but retired Black Hills State University professor Everett Follette brought the subject to life this week (3/6/12) for the Spearfish Area Historical Society March meeting.

About 75 folks showed up at the Senior Citizen's Center for some excellent information about the geology of the Black Hills, including many misconceptions that seem to linger on -- despite evidence to the contrary.

Follette has more than a passing knowledge of area geology, having been born in Belle Fourche and raised in Lead and Sturgis.  In 1955 he earned a Bachelor's degree in Physical Science at what was known as Black Hills Teacher's College in Spearfish, later picking up a Master's degree in Science Education at Iowa State Teacher's College in Cedar Falls before capping that with an Education doctorate in Geology and Science Education. After eight years of teaching in middle and high schools at Custer and Sturgis, he started a 30-year-career teaching Earth Science and Elementary Science at Black Hills State University.

True to the style of a classroom teacher, Follette opened his presentation with a "pop quiz."  Fortunately, the exercise was an ungraded event!

One of the questions offered a multiple choice regarding the Bad Lands of South Dakota. Do paleontologists consider the Bad Lands to be a premier site for finding (a) mammals, (b) dinosaurs, or (c) fish and other sea life?

The answer surprises many folks -- "mammals."

"These oldest Black Hills rocks are approximately 2.5 billion years old," said Follette, adding that they're part of the crystalline core of the hills, including the granites of Mount Rushmore and the metamorphic rocks that were "changed by the heat and pressure associated with the injection of the molten rock that produced Harney Peak and the other igneous rocks of the hills."

Follette talked a bit about rare minerals and disucssed the Etta mine, located just a mile southwest of Keystone in the vicinity of the Keystone cemetery road.  The surface mine contained a spodumene crystal that measure 57 feet long.  Spodumene is mined for its lithium content.

He also shared photos of the boulder fields near Piedmont, which many folks -- including a younger Everett Follette -- had thought were evidence of glaciation in the Black Hills.  While enrolled in a geology course at the School of Mines, he discovere from one of his professors that the Piedmont rocks had been carried by stream and mud flows associated with floods in earlier times.

Long-time Spearfish residents will recall a massive snowstorm around Mother's Day in 1965 that was followed by a downpour of rain.  Follette recalled the storm.

"The subsequent flood and destruction in lower Spearfish Canyon and within Spearfish itself -- along with the great piles of debris and boulders of two and three feet or more in diameter -- helped us to realize the great power that water and its attendant debris has."

With charts and graphs, professor Follette provided an excellent discussion about artesian aquifers, which are confined aquifers containing groundwater that is under positive pressure.  In our area, the rock layers that are the primary artesian aquifers are called the Minneslusa and the Paha Sapa (or Madison).  And the limestone plateau in the Black Hills provides the major recharge area for these formations.  Follette also noted that all of the commercial caves in the Black Hills are found in the Paha Sapa limestone formation, and he highlighted the fact that there are many small caves that can be observed in the walls of Spearfish Canyon and little Spearfish Canyon.

Again resurrecting the not-too-distant past, Everett Follette recalled the flood in the spring of 1964 and noted that had it not been for the efforts of city employees and other heavy equipment operators, "Spearfish Creek would have abandoned its bed near the city park and would have established a new course down Third Street."  He recalled watching the flowing water "cut an eight-foot channel" through the cement block walls of a home just below the park as the water proceeded to wash both the blocks and rocks down its new course on Third Street. 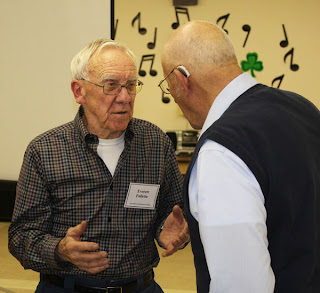 Follette capped his talk with references to the white mineral we know as gypsum, citing just how problematic it is for builders, because foundations placed over gypsum tend to collapse when gypsum dissolves, which it does readily in water.  One of the more well-known locations where gypsum had a significant impact is the buffalo jump near Beulah, just across the Wyoming state line.

"Geologically, the structure is called a 'sink hole.'  It is believed that water from the artesian aquifers moved up through the overlying gypsum layers causing the overlying Spearfish formation to collapse," Follette noted.  And that's the same phenomenon that's believed to have created Cox and Mirror Lakes near Spearfish.  Both of the lakes is believed to be quite deep, Follette says, "with depths of at least 60 feet."

This was perhaps one of the best-prepared presentations we've enjoyed at the Spearfish Area Historical Society, and we appreciate Everett Follette sharing his notes with us, and we used them in preparing this narrative.  A tip of the hat, too, to Rand Williams for providing the screen.  Of course, the treats were excellent, thanks to the good work of Catherine Polley and Alyce Schavone.  Norma Landsberger has been coordinating snacks for the past several years and will be stepping down from that responsibility.  Our deep thanks to Norma for her contribution.  Anyone willing to coordinate snacks for programs next year (September through May) is encouraged to contact Larry Miller by phone (722-6018) or e-mail.

On the business side of things, the society unanimously adopted revised bylaws, and a copy of the new document is posted online under the "Bylaws" tab above.  Many thanks to committee chairman Leo Orme and members Alyce Schavone, Walter Buccholz, Callie Houghton and Larry Miller for their efforts over the past few months in recrafting this important document.

Mark your calendars now for the April 3rd program, when Dr. David Wolff returns with a new take on Dying in Deadwood - Violent Deaths in the Early Hills.