The Furois Family of St. Onge

Maureen Glanzer, Bernadine Hansen and Ed Furois share the story of their family history "The Furois Family of St Onge" with over 90 members of the Spearfish Area Historical Society on Jan 5, 2016.

Maureen started the story out with the Stanislas Furois family arriving from Canada in Deadwood in 1879 and moving to the False Bottom area.

Son, Adolphe, got a toothache and walked to Deadwood all night in the middle of the night to get to a dentist.  He decided after that to live in town, Deadwood and then St Onge.   At one point he cut wood from Crooked Oaks and peddled it door to door in Deadwood. Adolphe helped build the stone house in St Onge. 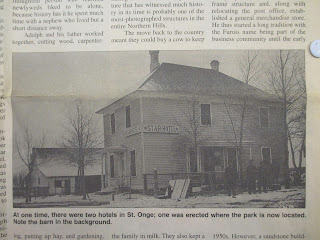 Adolphe's brother, Achille Furois, was a fiddle player and a ladies man and at one time met Belle Star of western fame.  He built a hotel in St Onge and named it the Star Hotel.


Adolphe and his family managed the only general store in St Onge.  His son, Charles L Furois took up as manager and the store stayed in the family into the 1940s and 1950s.


Ed Furois told the story of his father, Charles, waking him up at 4am to accompany him to the St Onge Cemetery where they took down the fence separating the Catholic and Protestants buried there.   Later, in the General Store, a patron came in announcing that the "Fence in the cemetery was gone!" and Charles nonchalantly commented "Is that so?"