The Development of the Ampitheater - presenter Paul Higbee 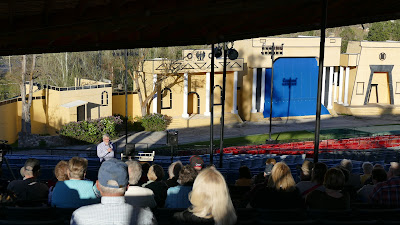 Paul Higbee presented "The Development of the Ampitheatre" at the Lookout Ampitheater early evening on May 3, 2016.  Rand and Gayla Williams, current owners of the Lookout Ampitheater, graciously shared the site.  They opened the box office building for us to walk through and we all sat in the left side amphitheater seats with a beautiful view of Lookout Mountain.

The amphitheater was built in 1939 for the Black Hills Passion Play, with 6000 seats and the longest stage in the world.  Martin Thompson was the primary contractor.  The yellow color on the buildings was beneficial to good lighting.  The parking lot design to allow people to walk in at a level with the seating was ahead of ADA regulations by 30 years.

But the story goes back before that when, in 1937, Josef Meier from Leunen, Germany performed his touring passion play in Sioux Falls.  That led to connections in the Black Hills, especially Guy Bell, a car salesman, who contacted Josef Meier to come to Spearfish and perform the passion play at Black Hills State College.  Josef Meier chose Spearfish to construct the stage on the site in 1939.  The first performance had an audience of 1,100.  There was no parking lot as people were expected to park around town and walk in.  The seating was pine planks, made by the Hargrave Sawmill.  Initially, there was no sound system and the actors had to fully project their voices.  A sound system was installed in the 1950's. Initially, there were no trees on the site, so the Garden of Gethesemane  and the Tomb were staged with cut trees.

During WWII, attendance dropped and the non-profit organization collapsed.  Walter Dickey offered an interest-free loan so that bills could be paid.  Instead of performing in Spearfish, the troupe took the passion play on the road to survive.   They returned to Spearfish in 1948 to begin a long run of performances three nights a week.

Audiences were often chilled from South Dakota cool nights or sometimes wet from rain.  The US Weather Bureau provided regular weather forecasts.  Motels offered Passion Play blankets.  The motels also had a concierge at the site for late-comers who still needed a place to stay.

Five to six million people attended the Passion Play before it closed August 2008.