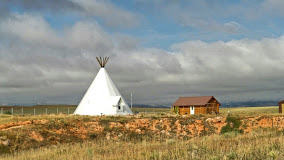 The Buffalo Jump was used by Plains Indians from 1550 to 1770/1800 when horses and guns came into the Native Americans possesion.   From studies of the type of flint found and from the style of arrowheads found, the following tribes used the buffalo jump:  Crow, Cheyenne, Shoshone, and Kiowa or Kiowa/Apache.

On a good wet year in late fall, approximately 100 braves would herd the buffalo into the natural draw towards the jump site.  Some would disguise themselves as decoy buffalo.  At about 100 yards away, they would stampede the herd so that about 200 buffalo would fall into the drop-off.  Many buffalo would die with the fall or suffocation and the rest would be killed with an arrow to the rib cage puncturing the lungs.  This history was determined by scientific research at the Vore Buffalo Jump.  For instance, they know that there were 200 buffalo killed in a single jump by determining buffalo in a layer and then counting the number of a single unique bone found behind the neck.


The site was discovered in 1969 during construction of I-90 on the Vore family ranch.  In 1989 it was deeded to Wyoming for education purposes in conjunction with the University of Wyoming.  However, it was never funded by the University of Wyoming.  It was given back to the Vore family in 2001 and is now owned and managed by the Vore Buffalo Jump Foundation.  7,000 visitors pay to see the site during tourist season which pays for the staff during the summer.  More information can be found on