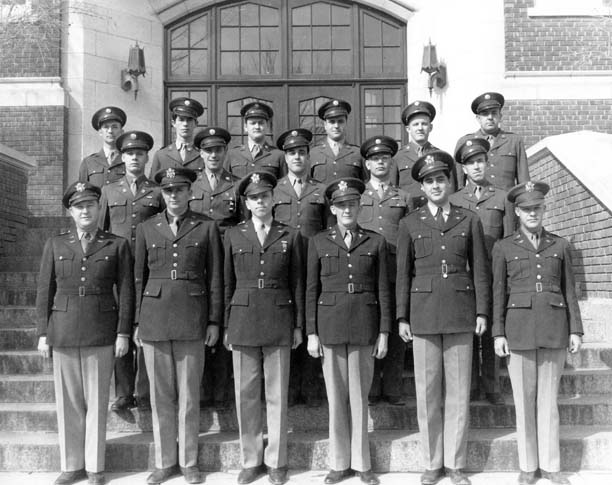 As a child growing-up, I was fascinated with a large black photo album of my dad’s.  Contained within its pages were dozens of beautiful, large black & white photographs, most taken by Spearfish photographer Josef Fassbender of Black Hills Studio.  Those photos captured the images of the personnel, and much of the daily activity, from March 1943 to May 1944 when the 93rd was on the campus at BHTC.  Images taken in and around Spearfish like the Passion Play, Mount Rushmore, Days of ’76 Rodeo and Spearfish Canyon were also included.
In addition to the photo album there were two other items that became more and more of an interest to me.  The first was a multi-page book/manuscript that outlined in great detail the history of the 93rd from its inception to termination.  It had been compiled by my dad in his then-capacity as Commanding Officer.  Its pages brimming with specifics about the three phases of training: Academic, Military and Flying.  Details of financial data from contract and purchasing budgets and expenses to faculty and staff salaries; comments about the program made by faculty members including familiar names like; Millie Heidepriem, Lavina Humbert, Fred Guenther, Evelyn Hesseltine and Grace Balloch; airport information, runway diagrams, maps and flight patterns with details about the maneuvers and proficiency the cadets were required to execute and demonstrate during their flight training.  What made this manuscript so interesting, but also somewhat frustrating, was that it was written in a format similar to, and contained much of the same information, as the online histories of other detachments that I had discovered when trying to locate information about the 93rd.  The second item of interest was an ordinary scrapbook, its pages filled with newspaper articles that had been carefully cut and pasted from local newspapers like the ‘Queen City Mail’ and ‘Rapid City Journal’.  As I was to discover, the scrapbook had also been created and maintained by my dad during his time in Spearfish.  I had seen the scrapbook many times over the years, but had never paid much attention to it.  Now, however, as I began to read the articles, in conjunction with the history manuscript, and the always fascinating photo album – it became clear, that contained in those three items was everything that was needed to properly document the story of the 93rd and the role it, the College and Spearfish, all played during the war.
~~~~~~~
In his journeys investigating the 93rd Army Air Force College Training in Spearfish, King made contact with retired Major General Homer I. “’Pete” Lewis, who was the commanding officer of the  93rd in Spearfish.   Major General Lewis held the original Army Air Force flag flown at BHTC in 1943 and gave the flag to Terry Neil King, who has now donated it to BHSU archives.  It was presented to BHSU President Tom Jackson at the conclusion of the program.