One long-time Spearfish resident remembered when the Women’s Christian Temperance Union (WCTU) was a big deal in the region, and she – along with lots of other high school students of the 1950s – signed pledges not to consume alcohol.

That was one of many reminiscences shared with the audience last Tuesday (5/7/09) at the May meeting of the Spearfish Area Historical Society – spurred by another delightful program from Linfred Schuttler, this time on the topic of Prohibition in South Dakota and its lingering legacy.

Some 75 attendees convened in the Spearfish Senior Citizens Center for the session, which was the final regularly scheduled meeting for 2009. 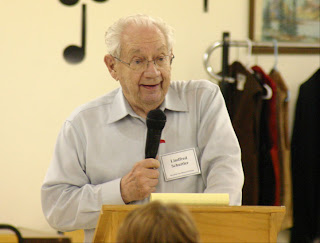 Schuttler noted that the first prohibition (or temperance) law in Dakota Territory was passed in October of 1889, but the law lacked any enforcement provisions. When the first South Dakota legislature met in 1890, they passed an enforcement bill that had enough bite to cause the closing of two saloons in Spearfish – but none in Deadwood!

Eventually, "package stores" gained favor, offering booze by the bottle -- if not by the drink. However, the Attorney-General cited them as "nuisances" and ordered them closed. Some continued to operate under a drugstore license, offering spirits for "medicinal purposes." The Queen City Mail observed that many folks had stocked up on the banned spirits and would likely not feel the impact of prohibition "for several weeks." Soon, municipalities were taxing package stores to generate revenue, causing something of a furor in the community, since such stores were presumably operating illegally in the first place.
~
Since Wyoming had no temperance laws, Schuttler said that the border town of Beulah, Wyoming, “came to the aid of suffering South Dakotans...and became a perpetual oasis for thirsty Dakotans.” Its citizens have continued to make similar treks over the ensuing years, seeking everything from Coors beer and colored oleomargarine to gasoline and – most recently – cigarettes.

In the wild 1880s, “Saloons in Deadwood hardly even made a pretense to close saloons after temperance laws were passed,” said Schuttler. It was the kind of unbridled raucous behavior that came to be associated with Deadwood over the years.

Even the legendary Carrie Nation couldn’t quell South Dakota’s appetite for alcohol, despite visits to South Dakota, including two to Spearfish.
You’ll find more information about Schuttler’s talk, along with details about the election of officers for the Spearfish Area Historical Society, by going to our History Photo Gallery.
While the society now takes a few months vacation from regularly-scheduled meetings, there's a special opportunity for members to tour the newly-refurbished railroad roundhouse in Lead later this month. The tours will be conducted at noon, 1:00 p.m., and 2:00 p.m. on Saturday, May 16th especially for members of the Spearfish Area Historical Society.
This opportunity is similar to one offered last October by Wayne Paananen to members of the Lawrence County Historical Society. That was a terrific tour, but we understand that much more work has been done to the old Lead Roundhouse, which served the Black Hills and Fort Pierre Railroad for many years. It promises to be a vibrant new historic attraction in the northern Black Hills, so this will be a rare opportunity for SAHS members to get their own sneak preview!