-
The weather simply wasn't cooperating.
Early evening rain and lightning nearly caused cancellation of the August Moon Walk to the historic Meeker Ranch homestead near Custer on Saturday (8/8/09). But Mother Nature relented, and about 100 people weathered the storm to enjoy another terrific educational hike sponsored by the U.S. Forest Service. 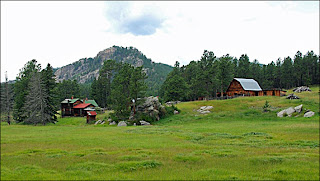 At first, the weather was sunny and mild, followed by clouds, rain, and then – the bane of all hikers – lightning! They tell us that only lightning will force cancellation of a Moon Walk. Fortunately, the small storm pushed rapidly through the hills east of Custer, and by 7:15, skies were clearing. It turned out to be a delightful evening for a hike – even with a few pesky mosquitoes nipping at our necks.

This place has been the catalyst for some interesting partnerships.

Five years ago this month – August 2004 – the Meeker Creek Habitat Conservation Project celebrated a partnership between the Rocky Mountain Elk Foundation, the U.S. Forest Service, and the Ina Davis family. The goal was to conserve the 278-acre parcel of land known as Meeker Ranch. 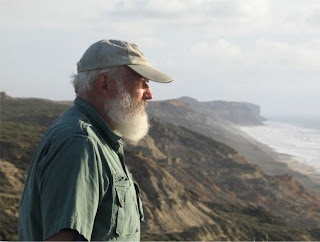 But it wasn’t until 2008 that the ranch captured more widespread attention. That’s when well-known Black Hills artist Jon Crane (left) helped elevate it into public consciousness. Crane’s advocacy in getting the Forest Service to alter plans to either burn down or tear down buildings on the scenic ranch had all the elements of a good news story. Bernie Hunhoff wrote one such story for the March/April 2008 edition of South Dakota Magazine.

Crane, like most of us, was apparently mesmerized by the beauty of the ranch, and enlisted others – including the media – to get the government to reconsider its initial plan to get rid of buildings on the ranch. The Forest Service was confronted with a myriad of safety and liability issues; retaining the buildings and fixing them up would be costly.

One senses that the road to the current “partnership” between the U.S. Forest Service and the Black Hills Historic Preservation Trust – which Crane helped organize – was probably full of potholes and detours. Nonetheless, there now seems to be a united effort to preserve and restore the Meeker Ranch property, including volunteers and private contributions.

As one meanders down the road to the open meadow that is home to the Meeker Ranch, it’s easy to see how Jon Crane, and all of us, could fall in love with this place. Crane has also dedicated a portion of his Meeker Ranch artwork sales to help with restoration. 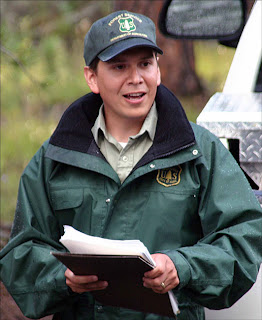 On this particular cool August evening, Forest Service archaeologist Matt Padilla (left) was our Moon Walk guide, providing not only a good overview of Meeker Ranch history – but sharing a few early photographs of the ranch and its founder, Frank Cunningham Meeker.

Born in Ohio, Meeker made his way west in the late 1870s and worked on cattle drives from Texas to the northern Plains. Padilla says the young Meeker also worked as a Pony Express rider before pursuing a ranch of his own in the Black Hills. After working on a ranch south of Custer, he homesteaded on the current ranch site in 1882. They called it “Willow Creek.”

Ownership passed from the Meeker family to the Davis family in 1952. Some 52 years later, in 2004, the property was purchased by the Rocky Mountain Elk Foundation, which subsequently sold it to the U.S. Forest Service. All have seemingly agreed to the Davis’ intent that the land not be developed. Less certain was how to deal with the buildings.

Perhaps the oldest building on the surviving ranch site is the Meeker home, built in 1887. Several additions have been built over the years, but no one has lived in the structure for more than 50 years. There’s a cool cabin about a half mile southwest of the main house, and it’s there that the Davis family – Dave and Ina – chose to live in the 1950s.

Each of the buildings on the Meeker Ranch has its own story – and this Moon Walk stirred up considerable interest in the venerable ranch. The huge turnout for the August event (including U.S. Forest Service District Ranger Craig Bobzien and his wife) is a testament to its popularity.

Our Moon Walk Gallery offers several photos and a bit more information. More importantly, perhaps it’ll stir your curiosity and put you on the road to Custer to explore the remarkable Meeker Ranch.