"Construction boom" of the post-Depression era 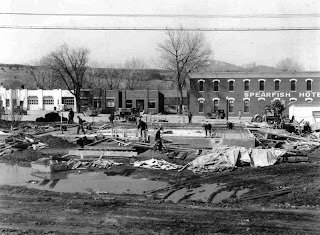 During and just after the Great Depression, the U.S. government greatly expanded its public building programs.  That campaign included many "Class C" post offices for "second class cities," defined by the volume of postal receipts that ran through the facility.

This 1940 photograph shows construction of the post office at 526 Main Street, just across from the two-story Spearfish Hotel, which was situated where Heisler's Ace Hardware is located today.

A wood frame home had stood on this site previously.  The 1940 construction of the post office included a basement to house offices for some federal programs, such as the Cooperative Extension Service.

The architectural style employed in construction included a brick building with wooden doors and windows, and very simple forms of ornamentation.  Artist Marion Overby of Los Angeles was commissioned to do  scuptures for some of the post offices, including the Spearfish facility.  After consulting the mayor for ideas, she titled her work, "Fish Story," and the sculpture was hung on the wall of the lobby.

The post office closed at this location in 1997 and moved to 120 Yankee Street in north Spearfish.  It was then remodeled and occupied by Great Western Bank.

"The sculptures had been sent to the Smithsonian Institution in Washington, DC," says GWB president Tom Willnerd.

"But it was requested that they be returned to Spearfish as part of the restoration of the old post office.  They're once again on display in the lobby of the building."