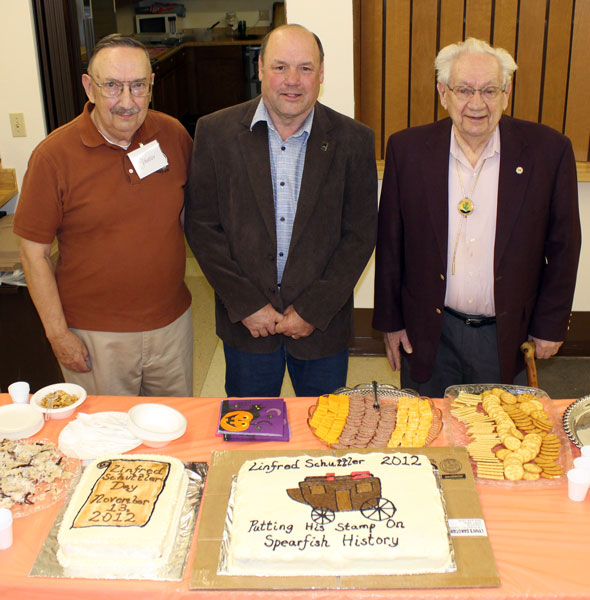 Photos and story by Larry Miller

Few people in Spearfish have contributed as much to understanding and promoting history as Linfred Schutter (at right in photo), the retired postal worked who -- as the cake in this photo depicts -- put "his stamp on Spearfish History."

So, it was fitting that Spearfish Mayor Jerry Krambeck (center) should issue a proclamation designating today -- November 13th, 2012 -- as Linfred Schuttler Day in Spearfish.  (Read the Proclamation here)  And while Linfred is always caught up on his history, we have a feeling the event this evening (11/13/12) caught him by surprise!  It took place at the regular monthly meeting of the Spearfish Area Historical Society at the Senior Citizen's Center in Spearfish.  You'll find more photos of the occasion in our 2012 Photo Gallery.

Schuttler's younger brother Ron joined his "big brother" and Mayor Krambeck for the above photo.  The younger Schuttler also share a few poignant stories about his brother, whom he touchingly referred to as "my hero."

The cake-cutting and fellowship followed yet another great program presented by -- who else but Linfred Schuttler? He recalled the excitement and history created by the National Geographic high altitude balloon launch Explorer II from the Stratobowl just outside of Rapid City in the 1930's.

Schuttler described how folks congregated around the gondola that came down in a field not far from White Lake, South Dakota, and who had a nice close-up view of the craft before military personnel from Fort Meade arrived on the scene and moved them back from the site.

This bit of South Dakota history has proven to be quite durable and increasingly fascinating for folks.  Last summer, a record number of "Moon Walkers"  participated in a hike that took them to a site overlooking the famed Stratobowl.  A story of the event can be found on Black Hills Journal.

The story of Linfred Schuttler is pretty interesting, too!  We recounted a few of his many life events in a story we wrote a couple of years ago after Linfred talked about "Spearfish CAVES."

Congratulations, Linfred, on this well-deserved recognition -- and THANK YOU for all the great history you've shared with us.  We look forward to many more of your programs!