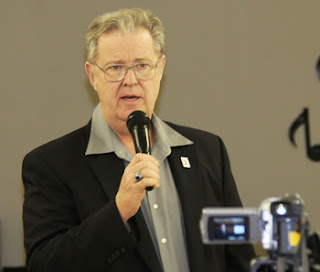 One of the powerful economic factors for the Black Hills region over the past seven decades has been Ellsworth Air Force Base, situated just east of Rapid City.  The story of Ellsworth is a fascinating one, reflecting significant changes in technology – and government policies – since the base came into being at the onset of World War Two.

Highlights of the Ellsworth AFB history were recounted Tuesday night (12/4/12) by George Larson, a Rapid City writer who focused on a variety of aircraft to help tell the history of the base.  Many of the aircraft and missiles discussed were deployed at the base over its many years.  Larson, a retired Lieutenant-Colonel in the Air Force, spoke to members of the Spearfish Area Historical Society for their monthly gathering at the Senior Citizens Center in Spearfish.  He was able to accommodate a last-minute program change, when scheduled speaker Rick Mills was forced to cancel his talk about "Railroads in the Black Hills."

Originally established in 1941 as Rapid City Army Air Base, the base has played an important role in national defense – and in the economy of the Black Hills – ever since.

“Early buildings at the base were largely made of wood and usually had no insulation,” Larson said, also noting that the buildings were heated by coal and or wood.  One of the few remaining structures from the old air base is a huge smokestack that Larson says still plays a role in operation of the facility. 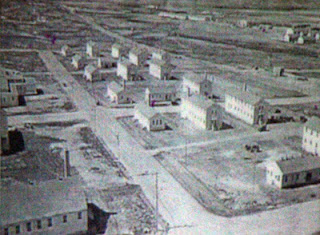 Larson anecdotes about early days of Ellsworth ranged from bomber training incidents where 100-pound bombs were actually filled with rancid flour – to tensions that grew between ranchers and the government over bomber training in the Badlands region.

“A lot of people also don’t realize that during the Berlin Blockade (1948-49) that the 28th Bomb Wing flew B-29’s to Germany and that they were placed on alert when the United States told the Soviet Union ‘if you mess with our Berlin Airlift, we will respond with nuclear weapons.’” A massive airlift of food and supplies into the city occurred from June of 1948 until May of 1949 – almost one year – before the Soviet Union relented and opened roadways leading in and out of Germany’s capitol city.

The Rapid City Army Air Base was renamed in honor of Brigadier General Richard Ellsworth, killed after his B-36 Peacemaker reconnaissance aircraft crashed in Newfoundland on a 1953 training flight. General Ellsworth was commander of the 28th Strategic Reconnaissance Wing at the Rapid City Air Base when he died.  31 other persons were also killed in the crash.  Larson showed a photo of the crash site in Newfoundland.  The wreckage, he said, remains exactly as it was in 1953, “except that they removed the live ammunition and some of the electronics.”

Much of Larson’s talk focused upon several aircraft flown by the Air Force – many of which were flown at Ellsworth.  He shared photos and stories about B-17,  B-29, B-36 and B-52 aircraft, among others.  He also talked extensively about the Strategic Air Command (SAC), where he had spent several years during the era of legendary SAC boss General Curtis LeMay.

“We had tests.  We had ORI’s (Operational Readiness Inspections).  You had to do it at 100 percent or you were out of the service.”  LeMay commanded the Omaha-based Strategic Air Command from 1949 to 1957.

“It was a real pressure cooker for all those years.  You could not make a mistake.  No mistakes were allowed in SAC; if it did, you were gone.”

Larson seemed to thrive in the SAC environment.    Referencing the “spot promotions” that were a part of the SAC culture under LeMay, he noted that he had received three such promotions even over pilots.

“That was part of the SAC culture that’s no longer there,” said Larson.

The final portions of Larson’s talk dealt with the Nike, Titan and Minuteman missile facilities that were strewn across the region and operated under the auspices of Ellsworth Air Force Base.  He recommended the Minuteman Missile National Historic Site, which is located about 75 miles east of Rapid City not far from Interstate-90.

We've included a few additional photos and some more information about Larson's talk and Ellsworth Air Force Base in our Spearfish Area Historical Society Photo Gallery.

You can also find links to more information about the history of Ellsworth Air Force Base by visiting Ellsworth Historical Features, part of the official Ellsworth AFB web site.

Larson’s book about the history of Ellsworth Air Force Base was originally due out this last summer; however, he says the publisher has expanded the size of the publication, which should better showcase the many photographs that are included in the publication.  Entitled Thunder Over Dakota–The History of Ellsworth Air Force Base 1941-2011 is now expected to be available in the spring or summer of 2013.