Members get a glimpse of the Fassbender Collection...

For much of the 20th century, the name Fassbender was synonymous with “photography” throughout the Black Hills and much of the surrounding region.  German immigrant Josef Fassbender arrived in Spearfish in about 1924 when he went to work for the O. A. Vik Studio.  By 1928, he had established his own Black Hills Studio.  He and his family would continue the business for some six decades -- well into the 1980’s.

“It really was a family affair,” said writer Paul Higbee, who presented the program highlighting the Photography of Joseph and George Fassbender last night (1/8/13) for the January meeting of the Spearfish Area Historical Society.   Josef Fassbender’s daughter, Betty Johnson, was in the audience, too, offering clarifications and anecdotes as Higbee wove the story about the Fassbender family business.  Fassbender's great grandaughter, Julianne Zoller and her daughter, Nora, also attended the meeting.

About 75 people were on hand for the event at the Spearfish Senior Citizen’s Center. The program included a screening of regional photos taken by the Fassbenders over the years.  They were described by Richard Carlson of Lead, who is spearheading the indexing and scanning of the formidable collection of photos estimated at about 800,000 images.

Josef M. Fassbender was born in Lobberich, Germany in July of 1892 and studied architecture in Cologne and later did postgraduate work at Chemnitz.  Before the onset of World War I, Fassbender decided to leave Germany and came to the United States.

“He was about 20 years old,” said Higbee, and he arrived in the United States with a Father Golden, who was en route to do missionary work on an Indian reservation in South Dakota.  But for young Fassbender, there was a brief stop in Indiana, where he briefly studied English, according to Higbee. 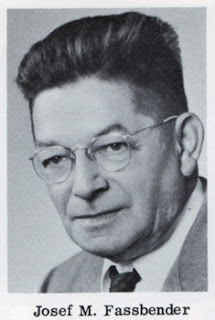 The 1956 Who’s Who for South Dakota indicates that Fassbender arrived in South Dakota in 1914 and worked a couple of years as a cowpuncher near Lovell, and then was a clerk in the drugstore at Faith before he established Josef’s Studio in Faith in 1917.  The following year, he married Magdalena Mengenhauser, and they would begin their family of three boys and two girls.

When Fassbender came to Spearfish in about 1923, he worked for O.A. Vik, who had a photo studio on the corner of Main and Illinois, where “Horses to Harleys” is now located.  The building in those days was a white wood frame building with skylights – a useful feature for photographers -- always seeking natural daylight.

Most Spearfish old timers will remember “Black Hills Studio” at 621 North Main Street, where the High Plains Gallery is now located.  Along the way, Fassbender's would also have businesses in Lead and Sundance.

While Josef Fassbender was passionate about his photography, he did find time for community involvement.  He served on the Spearfish City Council and was a member of Lions, Elks, Knights of Columbus, and the Snapper Club.  Not surprisingly, he was also involved with regional and national photography associations.

“Dad wasn’t a bookkeeper,” noted Fassbender’s daughter, Betty, who assumed those responsibilities as she got older.   Her sister, Julia, did the tinting before color photography became commonplace, and her mother did the retouching of photos.  Of course, all that required customers to identify the various colors that were to be included in any photograph that was to be tinted.

For a time, the family business enterprises included the Mobil filling station, which pre-dated the coffee shop and bicycle shop now located on south Main and Grant Streets.

Josef Fassbender died in 1958.  While his oldest son, Henry, had gone on to a career with the Eastman Kodak Company, another son – George – took over operation of Black Hills Studio at just 25 years of age.  He continued the family business for several more decades, but passed away in 1998.

Higbee said that George Fassbender cared deeply about what would happen to their photographs and before he died made arrangements for two good friends – both with deep roots in the region – to take custody of it.  Johnny Sumners and Ed Furois did just that and preserved the collection for several years.

A group of interested citizens helped to pull the collection together and it was moved to a south Spearfish building.  Then in 2010, the cities of Lead, Deadwood and Spearfish bought the collection for $300,000.  It was eventually removed to the temperature and humidity-controlled environment of the Homestake Adams Cultural Center in on Sherman Street in Deadwood where it remains today.

While the vast majority of the estimated 800,000 images are portraits -- mostly school pictures --  the balance of them include a treasure trove that captures a wide diversity of life in the Black Hills and surrounding region.  The photographs, negatives, slides, and film footage provide a glimpse of activities ranging from rodeos and sporting activities to the carving of Mount Rushmore and almost all significant activities that took place at Black Hills State University for several decades.

There are photos of president Calvin Coolidge donning an Indian headdress, along with a variety of other dignitaries who were pioneers in the region.  And Fassbender provided almost all of the official photography for Josef Meier’s historic Passion Play.  Homestake mine, politicians, and rare photos from almost every community in the region.

Higbee recounted the fact that Fassbender served as something of a news photographer during the 1941 misadventure of George Hopkins, who parachuted to the top of Devil’s Tower and couldn’t get down.  He was rescued six days later amid a frenzy of news coverage – with Fassbender photos appearing nationwide.

Richard Carlson invited society members who are so inclined to join the 40 or so other people who’ve volunteered to help with the organizing, indexing, and digitizing of the Fassbender photos.  There is a web site for the Fassbender Photographic Collection.  While it's a bit thin right now, the expectation is that it will one day be a very robust site that can help the publicly-owned collection become a valuable force in helping to tell the story of the Black Hills and its people.

Few things can capture the imagination more than images that  reflect our past.  It was little wonder that numerous folks lingered long after the historical society program had ended, eyeballing more of the remarkable photographs contained in the Fassbender collection.  For a few more photos and a bit of additional information, visit our History Photo Gallery.