There was standing room only Tuesday night (2/5/13) as more than 100 people sandwiched themselves inside the Spearfish Senior Citizen's Center to hear Dan Driscoll talk about flooding.

It's a topic all too familiar to many residents of the northern Black Hills, and memories of the devastating Rapid City flood of 1972 came back with little prompting as Driscoll gave the group an hour-long overview of historic floods in the Black Hills region.

An hydrologist with the U. S. Geological Survey in Rapid City, Driscoll has been very involved with studies relating to flood-frequency analysis.  Well rooted in science, he provided members of the Spearfish Area Historical Society with a thumbnail sketch of how scientists go about measuring size and frequency of flooding -- underscoring the importance of historical data, while conceding that there's still a lot of uncertainty about flow estimates in flooding rivers.

With a different and perhaps younger crowd, Driscoll's meticulous description of the processes used by scientists engaged in flood research might have been met with drooping eyelids and quick refuge to a cell phone to check messages.  Such was not the case on this evening -- with all-to-vivid memories of the June 1972 Rapid City area flood that killed 238 people.  This audience was transfixed on the topic and you could've heard a pin drop.  This, despite an overtaxed sound system brought in at the last minute to replace the Senior Center's sometimes cranky equipment.

Driscoll posed a question that was more than just rhetorical:  "…should floods of such large magnitude be expected about every 100 years, 1,000 years, or perhaps even less frequently?  The Black Hills area has a very robust history of flash flooding, and historical flood information can be very useful in addressing such questions."

With that in mind, Driscoll called for volunteers.

"We're interested in finding individuals who can help us in researching additional information regarding historical floods…this could be used as part of future paleoflood studies."

Probably not surprised by questions from the audience about the potential impact of future flooding in the region -- particularly from Spearfish Canyon -- Driscoll managed to allay a few fears, while seeming to concede the inevitability of such flooding.

He observed that the limestone plateaus in the vicinity of the headwaters of Spearfish Creek are "less prone" to heavy thunderstorms.  But he also noted that flash floods -- rapid rises in streamflow typically caused by intense thunderstorms -- are part of the Black Hills landscape.

Driscoll candidly remarked, while talking about Whitewood Creek, that "Main Street in Deadwood is right over Whitewood Creek.  When the 'big one' comes, it won't be pretty." 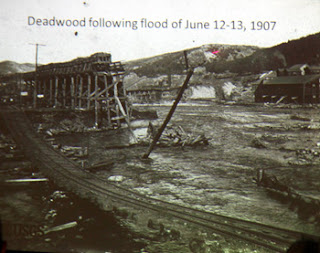 But there've been at least a dozen floods in the region over the last 2,000 years that were worse than the Rapid City Flood, according to Driscoll.

So, perhaps we're betting on the relative infrequency of devastating floods?   That's a wager probably not often considered in Deadwood casinos.

Such observations notwithstanding,  Dan Driscoll and his colleagues at the U.S. Geological Survey are collaborating with local, state, and other federal agencies in research that might provide new insights to regional flooding hazards.   Such research will help guide long-term policy and management aimed at reducing damage and destruction from flash flooding in the Black Hills region.

We hope a few folks stepped forward to aid in Dan Driscoll's request for volunteers to aid that research.

We offer here a few photos of the February meeting of the historical society in our History Gallery.  But this month, we really encourage you to follow this link to a USGS Flood Report that includes many stories and photographs of various floods in the Black Hills over the past century or so.  Like this February meeting, we believe you'll find it well worth your while.