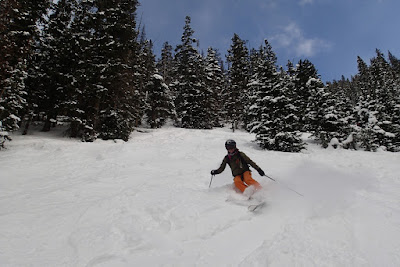 Paul Higbee presented the first 2017 program for the Spearfish Area Historical Society on Jan 3 at the Spearfish Senior Center.   The topic was "The Beginnings of Black Hills Skiing".

It all started in 1938 when the Bald Mountain Ski Club was formed by a group of interested citizens.  The cost to join was $2.50 plus $1.00 per month.   The name was selected because the group thought that Bald Mountain had the best opportunity to provide skiing.  However, that same year, Bertha Stewart (Stewart Slope) donated a plot of land, mostly-treeless, on Terry Peak.  Homestake Gold Mine donated a long fat rope and an engine.  Bud Irish, a Homestake engineer, put up the first tow and Ken Keller, Homestake Attny., defined the first legal needs for the Terry Peak slope.   1938 was the same year that the Passion Play came to Spearfish and the same year that the first motorcycle rally came to Sturgis.  In 1942, Homestake donated the Terry Peak rope and engine to the WWII efforts, and the slope was shut down during the war.

In 1952, a private corporation was allowed in to build the ski lift on Terry Peak.  The last national competition was held in 1968 in a year when there was a lack of snow in other ski states but the Black Hills had great snow.  In the late 1960's Deer Mountain skiing was opened.  By the late 60's Terry Peak was making snow; this was enhanced in 1971-72 when a well was drilled to provide the water source for the snow machines.
Today, there are over 70 runs in the Black Hills on the two mountains and Black Hills skiing is known for its beautiful location and lower crowds where there is opportunity to make many runs, up to 50, in a single day.

Local Spearfish Area Histoical Society
member, Bart Trucano, brought in a collection of ski photos and history along with a pair of vintage skiis.